Funny Headline of the Day

In today's Kansas City Star, Page A-3, I read the following headline and tried not to choke on my cinnamon toast:

You can read the whole article if you want: click here

But you can probably guess what it says. In America, "of course there is a war on Christianity today," says Tom Delay, and it is time for the Religious Right to start trying in earnest to influence public policy (if you are at work, try not to laugh too hard, because those desk chairs are notoriously unstable).

Oh, and just for you, friends, a bonus quote of the day. Rev. Rick Scarborough, who is identified in the article as "a fellow Texan and key organizer of 'values voters' in the 2004 presidential election," offered a description of Tom Delay (that guy under endictment for conspiracy and money-laundering, and "under scrutiny" for his many ties to tainted lobbyist Jack Abramoff). According to Rev. Scarborough, Delay is "a man God has appointed...to represent righteousness in government."

Repent, for the end may very well be near.
Posted by Donna at 8:32 AM 1 comment:

Great column in today's Star by Miami Herald columnist Leonard Pitts, Jr. Give it a click and a read.
Posted by Donna at 3:18 PM 2 comments: 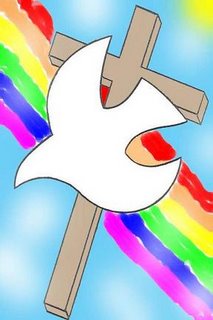 Tom Fox is dead. They found his body yesterday in Baghdad. Tom was one of the four members of a Christian Peacemaking Team abducted in Iraq late last year. A recent video broadcast on Al Jazeera showed the other three members, but there was no sign of Tom. Yesterday the worst fears of those praying for his safe release were realized.

But this is what Tom himself wrote about his mission:

"We reject violence to punish anyone. We ask that there be no retaliation on relatives or property. We forgive those who consider us their enemies. We hope that in loving both friends and enemies and by intervening nonviolently to aid those who are systematically oppressed, we can contribute in some small way to transforming this volatile situation.”

What a beautiful statement that is. True peacemakers are rare, and one is now lost. I pray for his family, his friends, and his colleagues at Christian Peacemaker Teams. Theirs is the work of abiding peace--the peace which rejects all forms of oppression, violence and tyranny, even in the face of terrible tragedy. The powers and principalities of our world have a lot to learn from Tom Fox.

You can read the last statement Tom made before being abducted here. It is worth reading, and worth prayerful meditation. His words live on, even as his body is no more.
Posted by Donna at 8:22 AM No comments:

I was called for jury duty for Monday. I wasn't overjoyed, to be honest, but it's the duty of the citizens of a democracy to serve, so off I went, ready to serve if called.

Jury duty cost me somewhere between a hundred and a hundred fifty bucks, since I usually work lunch and dinner at the restaurant on Mondays. But that wasn't the bad part.

We had to be downtown at 8:30 a.m. Since traffic can actually be heavy at that time (caveat: for Kansas City--we never have much traffic, thankfully), I left my house just after 7:30. Icky early, in my privileged world. Not the worst part of the experience, though.

When I arrived, ten minutes early, there were no more seats in the Jury Room. By 8:45, there were people standing all around the room, and out in the hallway. We stood for a couple of hours, until they started dismissing the people with excuses like "but I'm in seminary..." Not the worst part, either--in fact, I made a couple of nice friends, one of whom turns out, like me, to have attended San Francisco State for her undergrad. Small world.

I waited for six hours, and was never called (not even for the on-call panel). It was kind of tedious, but I talked to old and new friends, and the day passed uneventfully. Definitely not the worst part.

Actually, the only unpleasant part of the whole experience was filling out the questionaire they give you when you arrive. On the questionaire, top of the second column, is a line marked "Marital Status." I contemplated that line for a while, sighed, and wrote in "single."

The thing is, I'm not single. We were married November 8, 2003, at First Lutheran Church in Mission Hills.

But there I was, sitting in the Jackson County Courthouse Jury Room, and the correct answer to the question, in the eyes of Jackson County, Missouri, US of A, is "single." I married another woman, and The State wants nothing to do with that.

This isn't a big red state/blue state, liberal/conservative thing. It's a small thing. Not "small" as in "unimportant," but "small" as in "individual, particular, personal." Every day, individuals across this great land of freedom and opportunity are denied the opportunity to tell the truth about their lives to a world which teaches them that their truth isn't real.

There was no way to fill in the "marital status" line and not feel like I was lying. If I wrote "married," I would have been imposing my truth on a legal system which doesn't recognize it. But when I wrote single, I felt as if I was denying the relationship at the center of my life, a relationship which is every bit as important and life-sustaining to me as any recorded in the files in the Jackson County Courthouse.

The day is surely coming when it will be okay to write "married" on that line. That will be nice. Not just because gay and lesbian people are longing to have our relationships recognized in the ways that other relationships are recognized. But because it will be nice not to have to worry about being thrown into a quandary by something as small as a jury questionaire.
Posted by Donna at 10:19 AM 2 comments: