I like politics.  I do.  I find the whole thing fascinating, and I am very interested in the leadership of our country, state, and city.  But I'm about over this election.  I don't want to see any more glossy ads asking if I "know what Todd Akin has said now."  I'm sure it is offensive.  But if people are still voting for that guy, they obviously don't care what he says.  Maybe if he burned a flag or offered to raise taxes on billionaires--that might get their attention.  Another round of sexist statements just means it's Tuesday.

I watched the debate last night and felt as unconnected to both candidates as I ever have.  Both went on and on about how strong the military would be under their leadership.  Both went on and on about being "tough on Iran."  They'll also be tough on China, the country we love to hate, whose exports keep Walmart in business.  We all hate the trade imbalance with China.  Most of us have homes full of Chinese products.

I am over the hypocrisy.  I am over the decidedly unChristian values on display from people who profess deep faith in Jesus.  And I am over the coarseness of our rhetoric, especially as it pertains to the president of the United States.

Last night after the debate, super-conservative talking person Ann Coulter tweeted, "I highly approve of Romney's decision to be kind and gentle to the retard."

I hesitate to quote that directly, because the final word is highly offensive.  It's a playground word, one that schools are symbolically burying in order to help kids remember not to say it.  And little kids are learning.  Perhaps someday Ann Coulter will attain the enlightened perspective of a typical second grader.

You cannot say that about anyone.  You must not say that about the President of the United States.  There is still a certain level of decorum and respect owed to the highest office in this land.  If you want to claim any gravitas in speaking about who should be the next president, you might try according a little dignity to the current one.

And if you're going to insult him, at least pick something that makes sense.  The president's high level of intelligence is undisputed.  Even people who don't like him grudgingly admit that he is smart.  So along with being a terrible insult to people who struggle with mental and learning disabilities--a word that second graders have learned not to say--your comment was ridiculous. It was a word meant to offend, one which you just grabbed out of your bag of "words no one should say."  The same way the schoolyard bully calls a kid "gay," even though the child's sexuality isn't in question.

I was already over Ann Coulter.  But I think I'll be glad when November Seventh gets here.  Then I can generally avoid being offended if I stay away from The Learning Channel and Fox News.  Assuming we all vote based on actual research, and not things we see in glossy advertisements or read on Twitter, or Facebook, or somebody's blog.
Posted by Donna at 7:38 AM 1 comment: 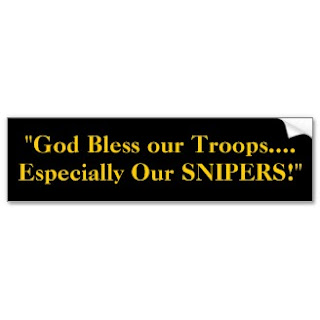 Saw this bumper sticker the other day.  As I drove past the car, I exclaimed, loudly, "For God's sake!"  Which was rather ironic, I suppose.

I searched the interwebs and read a few explanations about this bumper sticker.  There was a whole conversation on the Austin, Texas Yelp site, which had the flavor of most anonymous internet conversations:

Lovely Lady:  I saw this bumper sticker the other day and wondered what it meant.

Wish it was Friday:  I was wondering that, too.

Big Dog:  I did an extensive search on Google.  There was a lot of BS, but I found this:  "This sticker originated at blah blah munitions company and they are praying for the safety of our snipers.  Those snipers save lots of lives, since they can make surgical strikes."

Fabulous Frank:  That sticker is not very Austin-y.  Give peace a chance, y'all.

Lovely Lady:  Oh, thanks.  I googled too and didn't find a good answer.  You rock, Big Dog!

Barry the Welder:  Frank, you are an idiot!

Fabulous Frank:  I was being ironic.

It goes on.  I changed the excellent screen monikers and paraphrased the dialogue, but that captures it pretty well.  There was much more, but I didn't feel like reading to the point where the conversation devolved to pre-verbal grunting.  I no longer read the "Unfettered Letters" section of the Kansas City Star website, because it is simply a depository for hateful discourse, with the occasional salient comment.  I'm not willing to  sort through that much poop hoping for a pony.  There seem to be people with a lot of time on their hands these days--a lot of time, and not much love in their hearts, or at least in their fingertips, which is the problem here, exactly.

We have a multiplicity of opportunities for coarse discourse at our fingertips, and on our bumpers.  I'm not sure what motivates someone to put a bumper sticker on their car that says "God bless our troops...especially our SNIPERS!"  I do know that it is not a benevolent wish for the protection of American soldiers and marines who happen to be snipers.  The punctuation makes that abundantly clear.  This is a "prayer" for those who locate and destroy our "enemies" with precision.  It is a prayer for killing.  One could support it with a biblical argument, but not a gospel argument.  Yeah, I'm Lutheran--I get to make that distinction.  Thanks, Martin Luther!

I do have a few theories on what the motivation for this sort of hateful discourse might be:

Theory #1:  We really do believe that an American life has more value than an Afghan life, or a Pakistani life, or the life of anyone else who might be found in the crosshairs of a sniper's rifle.

Theory #2:  We no longer feel that anyone truly listens to what we say.  So we say it in such a way that it cannot be avoided.  We speak in sweeping generalizations, in shocking language, in profanity--in much the same way that a six-year-old will smack another child just to get attention.  We'll take the negative if we can't get the positive.

Theory #3:  We are becoming an increasingly polarized people who turn to hateful discourse out of anger at our lack of power, or perceived lack of power.

It could be any of those, or something else.  It's likely a hybrid of all three, added to the convenience of sharing our thoughts anonymously, semi-anonymously, or at least at a distance, on so many digital formats these days.  Like this blog, for instance.

So we have a problem and it is perhaps merely attributable to sin and therefore a part of the human condition, but I'm inclined to think there is a solution.  First we have to ask a few questions.  I would pose these:

-->How do we recover peace in our discourse?

-->How do we learn to speak out of love and not anger?

-->And when anger is unavoidable--when there are children going hungry in a prosperous country (or any country, for that matter), when American soldiers and marines are dying for reasons that seem abstract or fictitious, when the gap between rich and poor passes "obscene" and heads for "absurd"--when injustice is the order of the day, and we are obligated by faith and/or reason to speak out, how do we do so in a way that doesn't alienate those who really need to hear our message?

I am increasingly convinced that we need to stop and answer those questions, before we're going to solve much else.