Out of the Ether!

Okay, so the Phill Kline post reappeared when I posted just now (see below). Cool.
Posted by Donna at 8:40 AM 1 comment:

Forgive me Father, for I have procrastinated. It has been two weeks since my last blog post.

It's only been a week since I wrote my last entry, though. So I think I get a minor indulgence for that, yes? A week out of blogging purgatory?

I wrote a long entry on Phill Kline's unbelievably unethical behavior at churches in Kansas, complete with a great Lee Judge cartoon from the KC Star. But Blogger ate my homework. Really. I went to post it and it disappeared into the cyberspace ether. I'll try it again.

I'll also be more regular for the next couple of days, and then we'll see what happens on vacation...
Posted by Donna at 8:33 AM No comments: 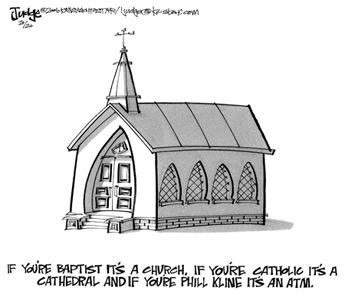 I wrote a while back about the email memo Kansas Attorney General Phill Kline sent out to his staff, headed "church efforts." In the memo, Kline described the importance of securing preaching gigs at supportive churches, followed by off-site money-raising rallies. The memo specifically instructed staff to have the pastor invite five "money people whom he knows can help."

The choice of pronoun is a good indicator of what sorts of churches Kline has been visiting during this election season. The whole memo is an indication of what is seriously wrong with churches becoming too involved in election politics.

Yesterday the Kansas City Star reported that the former Attorney General of Kansas, Bob Stephan, had resigned from his advisory post within the Kline campaign, citing the memo and Kline's visit to The Light of the World Christian Church. Kline preached there in July. After he preached, the church made a donation of $1339 to SWT Communications, a company which "produces radio programs and church events and retreats." SWT Communications is operated by Deborah Kline, who happens to be married to Phill Kline. A month before Kline preached at The Light of the World, SWT made a donation of $1,181 to the Phill Kline campaign.

You can't really call it money laundering, though the money seems rather unclean to me. You can't call it illegal, since you'd have to prove that the church intended for the money to go to the Kline campaign, and SWT's donation was made beforehand.

Phill Kline defends these actions by admitting he's "been speaking to churches for years." He considers the money an offering for the service he provides to the churches.

My church pays an $80 honorarium to guest preachers. Admittedly, we're probably on the low end of the spectrum. I know some churches pay more. I don't know of any who offer amounts in excess of a thousand dollars. That seems a little high. And a little dumb, if you know the money is going to replenish the stocks of a company contributing to a political campaign. Just because you can't prove that it's illegal doesn't mean it isn't grossly unethical.

And I am deeply sad that houses of God allow themselves to be used in this manner. It's one thing for our politicians to have a credibility problem. I'm not saying it's okay, because it's not. We ought to expect more. We ought to demand more.

But when our churches have a credibility problem, we're in deep trouble. Churches have to be above reproach. They just do. The mission of the church is to preach the gospel to the whole world. That work is difficult enough in times when our churches are thought of well. The work is severely compromised when churches become ATM machines for politicians, and thoughtful people are tempted to shake their heads at us, and wonder what will happen next.

The award? Worst Fantasy Football Coach of the Week

I actually was feeling pretty prideful, after I had the only team in my Fantasy Football league to go 4-0. I thought I was a fantasy genius.

So this week, I, the genius coach of the team called Luther's Lions (the great Reformation-era fantasy team) made the following move: traded Pittsburgh quarterback Ben Roethlisberger for Chiefs quarterback Damon Huard. I also traded Jets kicker Mike Nugent for Chiefs kicker Lawrence Tynes. This wasn't a horrible trade--Nugent hasn't done squat for me, and I'd be fine at kicker if whatever is wrong with Adam Vinatieri would get right. I figured Tynes would have some field goal opportunities at Pittsburgh--since they would be tough in the red zone. But your kicker can only get points if his team can get across the fifty yard line once in a while.

I started both Huard and Tynes, along with Larry Johnson, on Sunday. I got a total of 5 points from Huard and Tynes. You have to know a little something about fantasy leagues (and the way points are scored in our particular league) to know how bad that is. Suffice it to say, it is bad. Really bad. Even in Pittsburgh, I was hoping for somewhere north of 20 points from them.

Larry Johnson got 8 points. And will start for me every week, because he is still the best running back in football, and all of the bandwagon-jumping negative commentary will just ratchet up the desire in his belly which makes him the best running back in football. He nearly had his head torn off last week, and was back in practice a few days later.

But here's how I won the Worst Coach of the Week Award: barring something crazy, I will lose by several points to a guy who didn't even start a quarterback. Both of his were on their bye week, so he just went without. He will beat me soundly, unless the Chicago Bears defense doesn't score five points against the Arizona Cardinals. Again, you have to know how the scoring works, but that is about as likely as George W. Bush appearing in a tie-dyed t-shirt and Berkenstocks at an anti-war rally.

Which reminds me...there are actually more important things in the world than Fantasy Football. And even regular football.

It's still a tough morning to be a Chiefs fan. Hopefully they just decided to get all of their really sucky play out in a single game. If so--good strategy.
I'm off to look at the waiver wire now.
Posted by Donna at 8:57 AM No comments:

The Root of All Evil

Sometimes the lectionary is a real bear. For the second week in a row, I'm having a hell of a time with my sermon. I meant to say hell. Because I'm feeling a devilish desire to duck out from underneath the gospel lesson (Mark 10:17-31--the story of the man called to "sell everything...give the money to the poor, and come and follow" Jesus). It is really tempting to just preach about something else.

I mean, come on! We just did divorce, and "traditional marriage" (arguable, absolutely, but it's a tricky lesson anyway). And now it's the call to give all we have.

The average Bible tries to help us, by telling us that this is a story about a "rich man," which could mean that this lesson is really about the call for rich people to give all that they have. Talk about the temptation in the wilderness. This really does feel like the preaching wilderness.

Yeah, I'm being dramatic. But it is truly a challenge to preach sermons which touch people, which call people into discipleship, and to be pastoral about it.

And like most preachers, I'm a little shell-shocked. I actually did have someone leave the church after I preached a stewardship sermon a few years back which invited people to eschew the call to "give until it hurts" and simply "give until it feels good." As many times as I looked at that sermon, I couldn't figure out what was offensive about it. But money is just so tricky. Our stuff is just such a potent intoxicant. That's why this lesson is in the lectionary, isn't it? Because we need to be reminded that discipleship is a call to give up and give in and give away. And take on the joy of walking with Jesus.

That might work. If I can get through the middle part.
Posted by Donna at 9:48 AM No comments:

Every Friday there are questions to answer over on the Rev Gals blog. Here's my first completed homework assignment. The subject is groups.

1. Tell us about any group(s) you currently belong to. (e.g. book club, knitting circle, walking buddies, etc.)
I belong to a really terrific covenant group. There are five of us, and we meet every other week for an hour (or a bit more) to touch base with one another on life, ministry, family, and whatever else is impacting our worlds. We're committed to accountability--we hold one another accountable for balance (always fun in the ministry), health, and truth, among other things. It's a really good group of folks, and invaluable to me.

2. Do you feel energized or drained by being in a group situation? If the answer is "it depends," on what does it depend?

It depends. :) I'm an introvert, so group situations can be draining, especially if I'm in a group of strangers. It always takes me a little while to warm up in the big groups, like Synod Assemblies and Convocations. That's partly the big group thing, and partly the "gee, I wonder which of these folks wish the lesbian pastor would fall off of the edge of the world?" thing. Yeah, paranoia--that's what I meant.
I can be energized by groups of people whom I know well, like my covenant group, and groups from my church.

3. Is there a role you naturally find yourself playing in group situations? That is, do you naturally fall into the leader role, or the one who always makes sure the new person feels welcome, or the quiet one who sits back and lets others shine, or the host?

I'm the leader at church, the quiet one in other groups, the host at home (at least I used to be). I'm the joker a lot of the time. So I guess the short answer to this question is "no."

One of the few times I wish I was a man. (The other big one is when needing to pee outside.) I like the handshake, but don't always know if it is appropriate. I like the hug, but...see previous answer. We are huggers at Abiding Peace. I know that's a little scary for new people, but hey, it's cleaner than shaking hands. And we love each other at church. And don't feel bad about it either.

5. Ice breakers: a playful way to build community in a lighthearted manner, or a complete and utter hell of forced fun and awkwardness?Bonus: If you answered "playful and lighthearted," share your favorite ice breaker.

How about "necessary evil?" I like them as long as they aren't too forced (and especially don't make you do anything ridiculous) and don't go on too long. They can be a nice way to get to know a few people in a group, if you know no one.

I have always relied on the M & M game. You give everyone a few M & M's, and then start a question around the circle. Each time someone answers a question, they eat an M & M. When little colored circles appear on peoples' palms, the game has gone on long enough. This icebreaker is easy, doesn't require you to do anything ridiculous, and, hey, there's chocolate.
Posted by Donna at 1:10 PM 2 comments: