A Plea from Donna's Palm Pilot

Hi there. Donna's Palm Pilot here. I hold her calendar, because she has all the organizational skill of a Bassett Hound. I need to ask for a favor, especially from you churchy folks.

Please, I'm begging you: stop scheduling things for the week after Easter. So far we have had to pick from 2-3 conflicting events every day that week, and Saturday the 18th and Sunday the 19th are the equivalent of scheduling armageddon. There must be 20 different places we could be that weekend (when, by the way, we have church, because unlike every other pastor in the free world, Donna doesn't take Low Sunday off).

The thing is...we don't really want to be anywhere that weekend. It's the weekend after Easter. We're both ready for a break. I've been ringing alarms and popping on and off for four days straight the week before. Well, weeks beforehand actually, since Donna can never remember what time she decided for the Seder.

I'm sure I speak for the calendars and devices of all of the other leaders at Abiding Peace as well. It isn't just Pastor Donna who works hard Holy Week. The good people of Abiding Peace are busy cooking and leading worship and helping set up and clean up. And they don't get to count any of that as work. So give them a break as well and don't ask them to come to things that weekend after Easter either.

I know you scheduling people wait until after Lent and Easter to plan your events and trainings and parties and concerts and meetings. I know you check your own Palm Pilots and Blackberries and notice that April 18th is the first Saturday after Lent and Easter. But there are actually thirty-six other Saturdays in the year.

Wouldn't it be possible to schedule a few things on those Saturdays?

Thank you for your time and your consideration of this request.
Posted by Donna at 11:38 AM 1 comment:

The View from the Back of the Bus

The ELCA released a document called "Human Sexuality: Gift and Trust" last month. This is the result of eight long years of "study" and conversation and general unease, ostensibly around "human sexuality," but really around "gay human sexuality." We're not actually studying straight humans, because we're already marrying and ordaining them. We studied them a long time ago, apparently, and didn't find them objectionable.

You can download the document here: http://www.elca.org/What-We-Believe/Social-Issues/Social-Statements-in-Process/JTF-Human-Sexuality.aspx I will warn you now that it is long. But...as a special bonus for those who order today...you'll also receive the "Report and Recommendation on Ministry Policy." That's the somewhat shorter document that proposes that we sort of adopt a policy for some synods and congregations--only the ones who want to--to call a gay or lesbian pastor, if they are so inclined.

I am really glad that we're making progress. I really am. We would be one of the only Christian denominations in the country with openly gay and lesbian pastors (accent on "openly"--we've all got gay pastors) if the recommendation is adopted. We already know that there are synods and congregations which will follow the procedure and open their call processes to gay and lesbian candidates. Probably not the synod in which I reside...

...and that's a bit of a rub. Not the part that makes this about me, exactly, but the part that makes this about all of the qualified candidates who still won't be considered, because the ELCA would make considering gay and lesbian candidates totally voluntary. A bishop whom I like and respect very much said this today in a press release: "No congregation or institution will be forced to call a leader they do not wish to call."

It is true generally in our denomination that a congregation can never be "forced" to call a minister they don't wish to call. Our pastors are called, not appointed, as in some other denominations. But it is also true that we don't allow congregations to close their call process to candidates on the basis of other considerations, like race or gender. So the Sexuality Task Force recommendations allow for a separate-but-equal sort of system, in which the vast majority of congregations will likely still choose not to consider gay or lesbian candidates.

So I'm a little grumbly about the whole thing, and would really like to know what some of you gentle readers think. 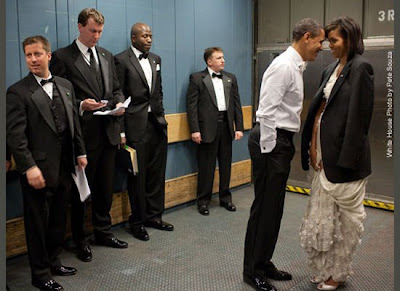 When Sean Penn accepted the best acting Oscar this year, he expressed pleasure with our nation (yes, he really did) for "electing an elegant man president."

"Elegant"--that's a nice word for Barack Obama, especially if Penn meant it the way I think he did--something akin to "rich in complexity and eloquent." No one with full faculties could deny that our president is both.

But if President Obama is elegant, the First Lady is uber-elegant. And together, they are simply lovely. Not just because they make a striking picture. It's clear from the picture here that they are attractive people. But this picture shows a lot more than that. It shows two people who like one another and share a level of intimacy and joy in each other's presence. They are so cute the Secret Service guys don't know what to do. I imagine they ought to figure it out, though, because they're going to be privy to a lot of scenes like this.

Okay, so I really like these two. I like pretty much everything about them. I admire them. But it's not just hero worship. I think they are what we need in this nation, and for our relationship with the rest of the world. I love the idea that these are the two folks who will present the face of America at state dinners throughout the world. I love that they are passionate and fun-loving and smart, smart, smart. It is right and salutary to have a couple in the White House whose personal relationship is an asset to their life and ours.

So maybe I have a slight case of hero worship...

But look how gorgeous they are. How can you help it?
Posted by Donna at 12:16 PM 2 comments: