For The Bible Tells Me So - Trailer

I Love My Team 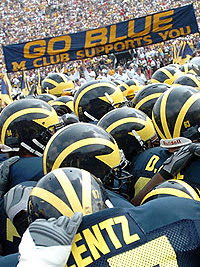 I don't remember when I became a Michigan fan. I think I was born that way, though if someone wants to argue that it's a choice, I'll probably give you that one.

I have been a Michigan fan for as long as I can remember, and I wish to be buried in my rattiest Michigan sweatshirt. (Someone please tell The Wife, as she is unlikely to read my blog ever.)

I still love my team, even after the Greek tragedy that was last week's loss to Appalachian State (say App-uh-latch-un, that's the way they like it. Really.) I may love the Michigan Wolverines just a bit more now, because it's sometimes easy to be a Michigan fan. Seriously--do any of us want to be married to someone who is perfect? Nah. Too much pressure.

So I love my team, and I love my friends, who have sent funny email and left funny phone messages. I particularly liked Andy's voicemail asking for a North Kansas City venue in which to hold a memorial service for the national title hopes of the Michigan Wolverines. That's good stuff.

By the way, if anyone wants to place a little friendly wager on this week's game, you can have Oregon and ten points. The spread is eight, but I expect we'll win by twenty. And every other game this year.

Just noticed that. I don't remember giving high value to any sociopathic tendencies in the quiz...

Perhaps my subconscious is just a teeny bit evil.
Posted by Donna at 6:59 AM No comments:


Your Harry Potter Alter Ego Is...?
created with QuizFarm.com
Posted by Donna at 12:35 PM 3 comments:

"Bathroom Lovin', Had Me a Bla-ast"

Great column this week by Rhonda Chriss Lokeman regarding the Larry Craig mess. She and her female friends have discussed it and agreed that you'd have to look far and wide to find a woman who would solicit (or have) sex in a public restroom. I have to say I've never considered it myself.

So I guess this really isn't about sexual orientation. Or is it just gay men who like a little love in the washroom?

Nah. Actually, researchers have said that a lot of the men hooking up in semi-public venues are actually straight, and looking for a little release with no attachments.

Which means that Senator Craig could very well be telling the truth when he states--with emphasis--that he is "NOT gay."

It's interesting to me that he saved his big boy Senate voice for denying (yet again) that he is a gay man. Shouldn't he be more interested in denying that he solicited extramarital sex in a bathroom?

Or worse, they don't really care if he was trying to get a little something in the restroom, they actually only care whether he's gay.

Is being gay really more disturbing than being an adulterer? Or a hypocrite?
Posted by Donna at 11:17 AM No comments: