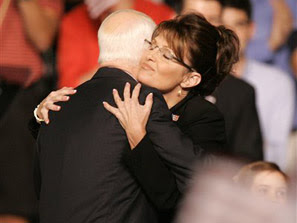 Last night I watched the end of the Republican National Convention, and I'm pretty sure I saw John McCain give a concession speech. I was puzzled when he shifted there at the end from a toned-down form of the same vague policy outline and sharp attack on all-things-Democrat that every other speaker at the RNC had given. I was puzzled because he shifted into something worthwhile and inspiring. Forgive my cynicism, but I honestly didn't expect that, given the tone of the rest of the convention.

Those people are mad. Mad, mad, mad. They keep trying to spin blatant self-interest and oligarchical politics into "family values" and it's looking more and more like lipstick on a pig.

So they go on the attack.

But I'm getting ahead of myself. Back to the concession. See, here's what has happened: John McCain, who is probably a good man, and who has served his country with honor, lost control of his campaign. He wanted to run a relatively (this is politics we're talking about) decent campaign and talk about issues. I really believe this, despite all evidence to the contrary. He began the election cycle with good advisers who would help him do that.

Then Barack Obama became the presumptive Democratic nominee, and Obamania took root in wider and wider crop circles. McCain's camp panicked and called in the dogs. And by "dogs" (to mix metaphors), I mean the minions of Karl Rove, who is not a good man and who has not served his country--or anyone else--with valor, honor or any other virtue I can think of, unless you count success as a virtue and I do not.

The Rovites drove the McCain campaign to the right. They convinced the candidate that campaign ads with substance were "old school," and the thing to do was associate the other guy with Paris Hilton and Brittany Spears. Just throw that out there and let paranoia and latent racism do the rest.

Then they convinced their candidate, Mr. McCain, to abandon his choice for a running mate, Joe Lieberman. Lieberman, the "Independent Democrat" cast into the role of this year's Zell Miller, wasn't going to give McCain any sort of Conservative Street Cred. Obama had had the sense to pick a running mate who filled in some of his gaps, notably foreign policy experience. McCain had a relatively moderate record (for a 21st century Republican) on right wing red meat, so he needed someone that the Phyllis Shlafly/Tony Perkins crowd could get excited about. Plus, there are apparently a whole bunch of Hillary Clinton supporters just dying to vote for the Republican ticket.

Is there such a thing as a "zero issue voter?" I can't imagine another way to explain how anyone could go from supporting Hillary Clinton to supporting John McCain. I just can't. She's not even a reasonably moderate Democrat. She's a liberal. It's (at least in part) why I like her, and why I'm still mad at her about the war.

And you'd have to be a character in a Twilight Zone episode to shift allegiances from Clinton to McCain now, since said Rovites talked their candidate into choosing as a running mate someone who shares in common with Mrs. Clinton the fact that they both have ovaries, and not a damn thing else I can think of, except for initial support of the bloody Iraq War. It's a wildly cynical, totally pandering choice, and I just can't believe John McCain went there willingly. I think he just gave in. And after last night, I can't help but also think that a little part of him gave up.

Which is why he finished his speech last night with a call to service. He wanted to say something of substance in this campaign before it goes totally south. And he did.

From here on out it gets ugly. The mudslinging has been immediate and breathtaking. Yesterday, Sarah Palin accused the Obama campaign of "spreading lies" about her family. When asked, no one in the McCain/Palin camp could name a single person in the Obama/Biden camp who had said anything negative, not to mention untrue, about her family. Barack Obama has declared any negative comments about her family off limits to his campaign staff, and promised to fire anyone who slings any mud at her private life. But the truth has left the building. From here on out we get the muddy and the muddier.

So thank you, John McCain, for reminding us last night that we are called to serve. Thank you for your brave service to our country. I hope that the rest of this campaign affords you some opportunity to continue serving the best interests of America, but I'm afraid I'm not holding my breath.
Posted by Donna at 9:37 AM No comments:

We engaged in some very Branson-y pastimes--went shopping at not one, but two outlet malls, which is something I like more than I like to admit. I have a little trouble getting motivated to actually go shopping, but once I'm there, I rather enjoy it. Especially at the outlets, where you can get really awesome Van Heusen shirts and Bass shoes for cheap cheap cheap. And I bought three good bras, so now I'm good for another seven years (which would be the last time I bought decent bras. Yes that's pathetic, but have you ever had to buy bras? It's not much fun. I never even know what size I am, since it seems to change. Okay, that's probably enough blogging about bras.)

We also ate at the breakfast buffet twice, which is really a lot less all-you-can-eat than one could enjoy in almost four days in Branson. Seriously, we could have packed on five, ten pounds. But we were reasonably good. We went to the grocery store and bought healthy food and ate meals at our condo. We ate out at a few restaurants, but we didn't go overboard. And we worked out every morning except for Labor Day which is a day of rest dammit.

And we went fishing with Val and Rick's equally fabulous friend, Martin. Twice. Valorie caught a very nice bass the second time. And we hung out at the pool. Played miniature golf on the course at the condo. Did one touristy thing--The Butterfly Palace and Rainforest Adventure--which was really pretty nice, if a bit expensive.

But other than some vague discomfort at the sense that I was in a town that would definitely have been the setting for an Orwell novel had George ever been there, I had a really good time.

It did seem like the perfect place to be when John McCain picked Sarah Palin to be his running mate. But surely that is another entry.
Posted by Donna at 7:12 AM No comments: