I really love going to daily mass. I love beginning the day with scripture and prayer among the community of the faithful. And I love being reminded of events on the church calendar which might otherwise escape my attention. For instance, today is the feast day of St. James, brother of John, son of Zebedee. I am so glad to be reminded of this, because I'm rather fond of James and his brother John. You kind of have to be fond of them together, since they don't seem to have done much apart.

I like these two because they are good, faithful disciples who also happen to be delightfully human. As such, I identify with them rather easily.

In the third chapter of Mark's gospel, Jesus calls the sons of Zebedee "Boanerges", which is a Greek rendering of an Aramaic word which Mark tells us means "sons of thunder." We'll have to take Mark's word for it, since the scholars aren't entirely sure on that front.

I'm glad to take Mark's word for it, because I love the image of James and John as The Sons of Thunder. They're blustery and strong and hasty. They come to Jesus and ask permission to sit at his right and left hand when he "comes into his glory." Even worse, in Matthew's retelling of that story, they send their mother!

While it is presumptuous, of course, to ask for the seats of greatest honor for life eternal, that's not their greatest sin in making the request. If we believe what we say when we recite the creeds, that Jesus is "seated at the right hand of God," then the seat to Jesus' left is, um, God's. So one of the Sons of Thunder (unwittingly I'm really hoping) asks to sit in God's chair.

When I was on internship, I took a group of students to Washington, DC, and we got a tour of the Federal Reserve. This included going into the boardroom, where we took turns sitting in Alan Greenspan's chair. It felt powerful. Then when we passed him in the hallway outside, I felt like I should apologize for pretending to be him, however briefly. The truth is, I couldn't be Alan Greenspan for five minutes.

Or God. I couldn't be God for a nanosecond.

And neither could the Sons of Thunder.

What they could do was accompany the Son of God, during some very significant moments--on the mountain of Tabor at the Transfiguration; at the Garden of Gethsemane just before Jesus was arrested. They were his friends; he chose them, along with Peter, to be with him in moments when he drew near to God. They never quite understood what happened on the mountain, and they fell asleep in the garden. But they were there.

Sometimes the best we can do is to try to be with Jesus. Try to walk the pathway he would walk, and to be with the people he would be with. Knowing all the while that we're not him, and we sure aren't God. We're just our imperfect human selves--full of thunder and laughter and tears.

But hang around Jesus long enough and crazy things happen. The next thing you know you've got your own feast day.
Posted by Donna at 10:04 AM No comments: 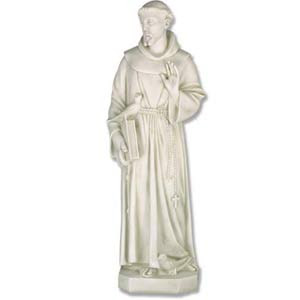 Saint Francis is missing. Not the actual saint, of course, but the statue we brought from our old building to our new location. The new location is a storefront, which has benefitted greatly from the addition of a few well placed touchstones from our former life in Ye Olde Church Building. The concrete statue of St. Francis was one such touchstone.
Concrete.
Weighing in at a venerable eighty to one hundred pounds.
Heavy.
So we didn't worry too much about him being out in the planter box in front of the storefr...church. In fact, it was lovely to have such a grand symbol of compassion for all living beings marking our front entrance. It made the place look like a church, and not a chiropractor's office.
I have to use past tense, because a couple of weeks ago, St. Francis disappeared from the spot he had been occupying for well over a year now. No ransom note. No evidence of foul play. Just a big hole in the ivy where once stood a medieval saint.
Francis would likely forgive this bit of petty larceny. But he is a saint. I am not a saint, so I am irritated.
Someone has stolen our statue, and I'd like to have him back. St. Francis was performing a number of functions and we wanted him to continue to perform them. He was saying something about our community--that we are lovers of living things, that we have our roots in the church catholic. He was doing outreach to people in the neighborhood. One of our neighbors brought regular offerings and laid them at his feet. This was a cool thing--we had an ecumenical planter box! I liked that.
I don't know if we'll get a new statue. That's the second one stolen, which is disheartening. We had a nice lion and lamb statue, which I bought at Hobby Lobby for twenty bucks. It was also a nice symbol, and it was disappointing when it disappeared. A little more understandable, I guess, since it was made of plastic and not solid concrete.
In response to the theft of St. Francis, the nicest woman I know said "I hope they got a hernia." Yes, we are upset.
I love being a church close to the street, but I guess it has its drawbacks. We're not leaving, though. It is good to worship amidst one's neighbors, both the ones who bring flowers for a saint, and those who steal statues.
Posted by Donna at 2:25 PM 1 comment:

Heard this morning on NPR:

"Democratic presidential candidate Barack Obama has nothing official on his calendar for today. Presumably he will be preparing for his visit to the Middle East..."

I love NPR. But I have to admit that even in the era of the 24 hour news cycle, Barack Obama's empty calendar just doesn't seem like news to me.
Posted by Donna at 9:12 AM No comments: