Lindsay Lohan got arrested. You may have been in Outer Mongolia and not heard about it yet. She was driving on a suspended license, with alcohol in her system and cocaine in her pocket.

The cocaine wasn't hers. It belongs to a friend, she says.

Barry Bonds is about to break Hank Aaron's home run record. The steroids in his pocket are something he knows nothing about. All he's ever used is an herbal cream his trainer gave him. Completely legal...unless someone was lying to him...

The Attorney General of the United States was on Capitol Hill again this week. He was called to explain the continued downward spiral in that cabinet department known (with increasing irony) as Justice. He explained nothing, beyond the fact that he apparently can't remember what he had for breakfast. How the man ever passed a bar exam is beyond me.

Okay, it's really not. Because, like virtually everyone else watching his performance (and there is truly no other word for it) before the Senate Judiciary Committee, I didn't believe that he couldn't remember the things he said he couldn't remember.

Just like I don't believe that the cocaine in Lindsay Lohan's pocket belongs to a friend, and that Barry Bonds has never knowingly taken steroids.

In Bonds' case, it explains so much. I was a Big Time Giants Fan when we traded with Pittsburgh to allow Barry to come home to the Bay Area. I remember those first couple of years when my friends and I would marvel at his off-season conditioning. He just kept getting bigger. And we just thought he lifted a lot of weights. (Oh, and pinstripes are slimming, so a Giants uniform made him look bigger.)

Sometimes I long for that naivete. Because it sure seems like we're being lied to on a regular basis, and are becoming conditioned to simply accept it. The fact that Alberto Gonzalez is still the Attorney General is a travesty, but it seems like it's going to stay that way for a while. Just as we will continue an ill-advised, illegal, immoral war, the justification of which changes more than Lindsay Lohan's mug shots.
Posted by Donna at 6:13 AM No comments:

How Jaded Are We?

Got this quote in an email from Sojourners today:

"Not surprisingly, the poll data showed that white evangelicals were somewhat more permissive toward torture than other religious groups."

This quote is from the New York Times. The Times may be biased. Oh, heck, The Times is most probably biased.

But still, how can it be "not surprising" that people who call themselves followers of Jesus Christ are "somewhat more permissive toward torture." Is it "not surprising" to The New York Times, or to the rest of us?

And if it's not surprising to the rest of us, are we outraged?
Posted by Donna at 8:12 AM 1 comment:

Last week was a good week, though you wouldn't have expected it. On Sunday, Rick, my lifesaver handyperson parishoner, put up the screen for our video projector. The projector is a bit late getting set up, but that is actually by design. We needed to feel out our new worship space in order to know how to set the thing up.

We thought we had it all figured out, but of course we did not. Rick installed the screen, then installed the shelf that he and his wife, Valorie--aka lifesaver #2--had bought. Then we turned on the projector and found that the projection was bigger than the screen. Spilling out on all sides. No matter what we did.

We did measure it; I promise. The projected image measured 66 inches when the projector was held up to where we were planning to mount it. After we got the screen, the image had expanded to some 100 inches, set on the smallest angle.

On to Plan B, which was going to involve some stuff about the ceiling and drilling and I lost track there--an involuntary reaction to despair about the fact that this would probably take a while and I was excited and wanted it done now as in right this minute. Oh, and I don't speak Handyperson.

So Thursday I'm at church and Tom, who takes care of our landlord's property, came in to look at the toilet, which makes a racket like I've never heard, which is not good, since it is more or less in our sanctuary. Tom looks at the new setup and says "every time I'm in here you've changed things around." (This is most certainly true.) Then he asks about the projector (which is actually sitting in the middle of the sanctuary on the bedside table which I liberated from home). I explained that the plan was to mount it on the ceiling, eventually. He says, "You know what you need..." and then some stuff about u-bolts and tightening with screws and electrical boxes and some other stuff I can't remember. Then he says, "I could do it for you." I heard that part.

And the next day, in he came, with some very long bolts, a shelf he spray-painted white, and all of his handyperson equipment, and up went a shelf on the ceiling, an electrical box right next to it to plug in the equipment, and holes so that we can run the cord from the projector along the ceiling to the computer, which now sits on the shelf we put up for the projector.

I offered several times to pay him for his time and materials. He said it was all stuff he had at home, and he did it as a gift for our congregation.

On Sunday, I got to run a little Powerpoint presentation--"Who is my neighbor?" And we had three visitors there to see it.

That's what Sprint has said to 1000 customers. Those 1000 people generated 40,000 monthly phone calls to the customer "care" center.

Here's what the letter said:

"Our records indicate that over the past year, we have received frequent calls from you regarding your billing or other general account information," the letter reads. "While we have worked to resolve your issues and questions to the best of our ability, the number of inquiries you have made to us during this time has led us to determine that we are unable to meet your current wireless needs."
"Therefore after careful consideration, the decision has been made to terminate your wireless service agreement effective July 30, 2007."

Sprint has waived the early termination fee for these folks, and is cancelling their last bills.

Yeah, it's probably a PR disaster, but I like it. People making, on average, forty calls a month to customer care are probably not interested in resolution. They're interested in complaining. If you've ever done customer service work (retail, restaurants, etc.), you've met these folks. They come to your restaurant time and again, complain most of the time, get free food, rinse and repeat. These are the folks who say things like "every time I come here something goes wrong." And as the service professional, you're actually not allowed to make the only logical response to this statement: "Gee, why do you keep coming here, then?"

I think Sprint is doing those folks a favor. They're probably not doing T-Mobile and Verizon a favor, but I guess that's not their concern. Perhaps the complainers will put some positive energy into finding a company that meets their needs.

Maybe Sprint is doing us all a favor, reminding us that complaining about that which cannot be changed is a fruitless effort. There's so much out there we really can change. Better to spend time on those things.
Posted by Donna at 6:31 AM No comments:

What's in a Name? 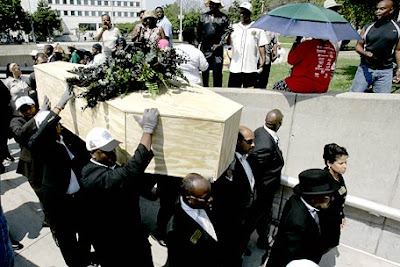 The NAACP held a funeral for the "N Word" on Monday in Detroit. I think this is a great thing. It seems like a way to move beyond an era in which people could be tagged with this vicious epithet in an attempt to take their dignity and power.
I think it's a good idea, but I say that from the privileged position of one who has never been subjected to the "N Word" and can't really imagine the totality of its power. Honestly, I really don't deserve a full say in this debate, and neither does any other person who can't really know what it is like to have the baggage of that word heaped upon him or her. Frankly, it's probably rather patronizing for me to say that this is a good thing. But hey, it's my blog, so I get to say what I want. We're talking about a very ugly word, and I think it would be good to bury it deep underground, as long as we don't now think that racism has been eradicated by a symbolic gesture. Sadly, racism is alive and well, and it will take a lot of pine boxes (and education, and dialogue, and changes of mind and heart) to lay it to rest.
This all gets me thinking about another debate in which I do have a stake. I like the word "queer." I find it to be a useful word, when applied in the proper context (in other words, when not hurled out a car window as a slur). It's inclusive, and avoids the alphabet soup of "LGBTQSAetc."
Or is it inclusive? "Queer" seems inclusive to me, because I think of myself as queer. There are a lot of folks who would accept one of the above soup letters, however, and would not ever in a million years call themselves "queer." So it is simultaneously an inclusive and exclusive word, depending again on the context. For many folks, that word is as offensive as the "N Word." This is generational and regional and surely cultural. When I was in Berkeley, I met almost no one who disliked the word "queer." Here in the Heartland, I have met several, and have taken to using the word much less often, so as not to run the risk of offending anyone.
"Queer" is an insider word, at least outside of academia, where "Queer Studies" programs are taking off. It's a word that certain people will get away with using, and others will not. That may be a problem; I don't know.
I actually don't know what to do with the word altogether. Should we bury it? Reclaim it? Use it selectively? Some other option I haven't considered?

Justice is blind, which means it can't see, see?

Q: Why did Scooter Libby lie to the Grand Jury?
A: Because he thought he could get away with it.