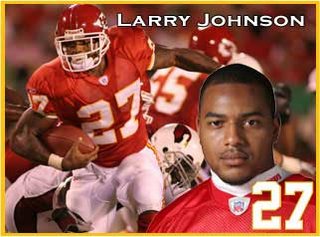 This is so awesome, because LJ is the #1 fantasy player, and he's a Chief! Not that I needed another reason to root for the Chiefs, who have done everything in the off season that they needed to do, with the possible exception of securing a more solid backup QB behind Trent Green. But that seems less critical (jinx warning) in the Herm Edwards era, when Trent will be handing off (to...oh...Larry John-son!) more than ever. I also have some confidence that Brody Croyle isn't as bad as he looked Saturday night, when he completed one of nine and was mercifully pulled for poor Casey Printers, who keeps having to stand behind the second team line (or run behind, as it were). And, yes, I wish we had Willie Roaf, but there's nothing the Chiefs can do about that. They've made it clear that his locker is still available.

I do hope its a good year for the Chiefs, mainly because I LOVE this team. Almost as much as I love my Wolverines. I also hope they do well because my 14 member fantasy team also includes Lawrence Tynes as backup kicker (behind Adam Vinatieri!) and the Chiefs defense--don't laugh, non-Chiefs fans. They're going to be better. Ty Law, baby, (!) who learned how to pick passes at a little school in Ann Arbor, Michigan. It just all comes around, doesn't it?

Okay, lunch break over. And I will try to write about something besides football now. But I got Larry John-son!

By the way, the fantasy league I'm in is called Go Blue Wolverines. Isn't life great?!
Posted by Donna at 9:41 AM 2 comments: 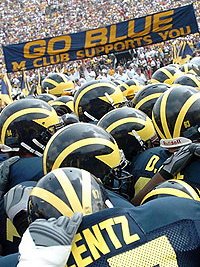 Michigan football kicks off in nine days...actually, just under nine days, since the game is at 11 a.m. Central Time, and it's just after noon here.

Hail! to the victors valiant,
Hail! to the conqu'ring heroes,
Hail! Hail! to Michigan,
the leaders and best.

There's another verse, but I'll spare you. Actually, there are a bunch of verses, and this is just the first half of the fight song chorus. But the chorus is the part sung by those of us who sing and pump our arms like crazy people. I can tell you that it's pretty powerful to be in Michigan stadium with well over a hundred thousand dear friends, all singing these words and pumping their arms.

I don't know what it is about Michigan football that captivated me so long ago. We moved from Ann Arbor the day before I turned seven. I didn't go to Michigan; I went to San Francisco State (which had a football team, though most of the students never went to a game). I always thought I'd go to Michigan, but reality set in hard my senior year, when I realized that I had neither the grades nor the money. I could probably have managed the grades, had I stopped feeling sorry for myself for being stuck in California. (pause for laughter) But the money would have been a bit more challenging. So SF State it was, and the decision was honestly a good one.

And through it all, I have been a fan of the Maize and Blue. That fan-dom goes way beyond the outrageously good show the boys put on practically every year. Michigan football is home to me. We moved around when I was a kid. Not as much as some kids, but more than I would have liked. Before starting high school, I had lived in four states. Started four different elementary schools.

Michigan football was a constant, a taste of something familiar brought into my living room every Fall. It was a reminder that some things stay the same, that there is an order in the universe. That good blocking and an effective pass rush can get you a long way.

This may sound crazy, or blasphemous, or both, but I sometimes think that Michigan football was a gift to me from God. There are those who will tell you that my rapt attention and verbal energy during a game approach the level of worship.

No, I don't worship Michigan football. And if I yelled like that in worship, I'd have to turn in my Lutheran Card. But just as the church year kicks into high gear each Fall, the boys in Maize and Blue drop into the living room, in the striped helmets which haven't changed their look since 1938.

Constants are good. Familiar is good. I'm keeping my Lutheran Card, and GO BLUE!
Posted by Donna at 10:50 AM 2 comments:

Okay, so I'm really not the idle blogger. I haven't posted anything here in a while. A long while actually. But I have written a bunch of devotions which are published on my other blog, tenminutesabbath.blogspot.com.

They're short devotions, each consisting of an opening prayer, a reading, a meditation, and a closing prayer. The readings are from the Bible, and from other places--prayers, readings and meditations from folks like the greatest Buddhist monk, Thich Nhat Hahn; Mohammed; Mother Teresa. I've tried to include a lot of different stuff, and to ask some questions in the meditations to help folks think about their faith and their lives in light of the readings.

Right now the devotions are set up as two "weeks of sabbath." The first week has two devotions for each day, morning and evening. The second week has one devotion for each day. Feel free to do a week of sabbath, or to just do one or two. Or just to look around and see if there's anything you like.

I think they're not bad, and hope that they bring a moment of sabbath into our busy lives.